When I was seven or eight years old, I already knew I wanted to become a musician. Experts say that there are seven different kinds of intelligence, one being the musical intelligence. This one, I think, I received by birth, and my father stimulated it during the years when I was a kid – the very period when the human brain is constantly growing. My father used to tell stories with musical accompaniment to my brother and me (I remember The Grand Canyon Suite by Ferde Grofé, for example); he encouraged us to play fake instruments on top of jazz recordings, pretending we were improvising, but taking care of the musical structures; he also made us recognize the actual instruments by their sounds. Everything was like a game. When I started reading in primary school, he put me into the Arts Academy in the village we had just moved to, Sant Pere de Ribes. From this moment on, my fascination for music became bigger, because I started to pay more attention to the dancing orchestras playing in the village for the local festivities. These musicians, always happy, talked long to my father, who was the presenter in their concerts many times. Sometimes they came for lunch to our home, and I was enthralled by their special cars: the singer had an Opel Mantal; the baritone sax drove a Peugeot 505 diesel; the conductor owned a Sport Seat 124. But what I liked most was watching and listening them onstage: the sequined suits shining in the colored lights, the smoke machine, the movement swinging from left to right following the music… I watched it open-mouthed and sometimes, when the musicians noticed my enchantment, they would wink an eye at me. And one of those nights, one musician told my father: >Molero, this boy is certainly gonna be a musician!

The above text is a passage from my book “Jo no sé res, sóc músic” (“I don’t know anything, I am a musician”). And that’s true: I might not know much about anything, but I know I am a musician. And being a musician is not a job, but an attitude in life. That’s why you can be a musician without making any money with music. And the other way around: playing music all the day but not being a musician. Well, living my boring philosophical theories, it’s clear my relationship with music is long, and during time has had different forms and intensities.

I started as a trumpet player in amateur “coblas” (folklore ensemble playing dancing music called “sardanas”), bands and dancing orchestras. Only now I recognise that all of them had funny names which played with catalan words and expressions.

After high school I didn’t go to the Conservatory, because I had the intuition my way wouldn’t fit with these old-fashioned institutions. I was always a free spirit. I combined my studies at the University Pompeu Fabra (Audiovisual Communication) with music lessons at Taller de Músics (with teacher Oriol Bordas) or Avinyó School (with teacher Jordi Torrens). For a short time I was already playing as a professional trumpet player in the Orquestrina Galana, Casellas Folk Sextet and the Barcelona Jazz Orchestra.

After graduating at the University I started working as a screenwriter in Televisió de Catalunya, mostly for programmes related to music (Sardana and Nydia),children’s programmes (Club Súper 3) and for artistic documentaries. In this period I also wrote and published my first book: Les quintes del biberó (Rúbrica Editorial, 1999), about the youngest children that had to fight in the Spanish Civil War. Alongside my work as a journalist and screenwriter I kept studying music (harmony and arrangement with Lluís Vergés) and trying out my arrangements and compositions on my own bands, the “Compania Catalana de Latin Jazz” and the “Transpenedès Jazz Orquestra”.

Then a drastic change in my life arrived when I was accepted as a student for “Jazz Composition and Arranging” at the Rotterdam Conservatory with teacher Paul van Brugge. There I had the chance to receive distinct musical education, namely a mix between classical and jazz styles with teachers such as Klaas de Vries (instrumentation), Wim Both (trumpet), Ilja Rijngoud (jazz language) or Jan Laurens Hartong (piano and harmony). On top of that, the dutch cultural life gave me the opportunity to listen to rehearsals and concerts of various top-notch orchestras: >Rotterdam Philharmonic Orchestra (then conducted by Valery Gergiev) or the Metropole Orkest (with John Clayton, Bob Brookmeyer, Vince Mendoza) and others. After finishing my studies at the Conservatory I spent one more year in The Netherlands working as a free-lance composer/arranger. 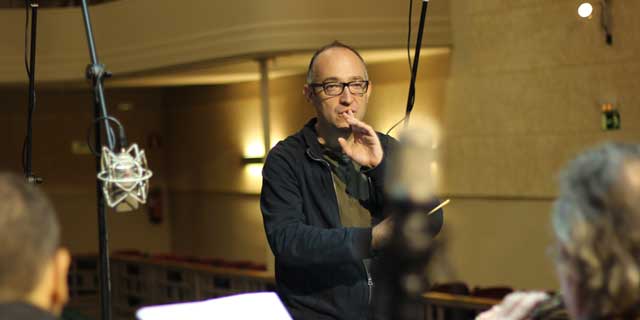 But one day I decided to go back home. My teacher Paul van Brugge warned me: “Be careful, you are about to move to a cultural desert”. Indeed, compared to the dutch cultural system and financial support for artists, Spain indeed is a desert. But like another teacher of mine, Lluís Riudor, told me once in Geography class: “Although it seems impossible, there are people living in the desert”. And here I am! Since I am back home, I have realized many musical projects, most of them created by myself, but also commissions as an arranger, composer or conductor. Conducting was a consequence of presenting my compositions in front of the orchestras. I studied conducting in Catalonia with Dolors Ricart and in the UK with Denise Ham. Conducting, once again, is more about attitude, psychology or charisma than about technique. That’s why lately I got more and more interested in the field of emotional intelligence – even so much that I studied to become a Coach in Instituto Europeo de Coaching. Coaching, so useful to achieve goals, has many connections with music. So I decided to combine both disciplines. The fact is that Music, the essential activity in my life, has many very important extra-musical qualities, such as perseverance, unconditional love, going through frustrations, balance and harmony.

Last but not least, the trombone. When I was a kid the music theory teacher used to ask us students which instrument we liked. I saw it clearly: the slide trombone. But my arm, to short because I was still a kid, could not reach the far positions of the slide. So the brass instrument teacher, Antoni Nicolás, gave me a trumpet. Trumpet kept being my instrument for more than twenty years, although I have studied piano and latin percussion as well. But one day I got to try a B-flat valve trombone, so similar to a trumpet but with the sound of a trombone, the instrument I always had in mind! From this moment on it became my new instrument. I said it in the beginning: My relationship with music has taken different forms and intensities over the years. And a friend of mine once told me: “You can play whatever instrument, Estevet, but you will always be a trumpet player”. That’s why music is something bigger than us.