The Fira de Indians de Begur 2014 was dedicated to Cuban music, so I was commissioned to create an exhibition about its origins.

I gave it the subtitle of “When Africa and Europe Encountered in America”, because it is a mix of three different cultures. In one hand, the ancentral rituals of the natives, such as Areito; in the other, the rhythms and drums of African slaves, like the rumba and the claves; and finally, the instruments and melodies of the colonizers, such as the guitar and the contradanzas.

What is the origin of the word guajira? Why is danzón the national dance of Cuba? What is the relationship between Johan Sebastian Bach and the Caribbean rhythms?

Later on, this exhibition (produced by the City Hall of Begur with by Publitesa Comunicació) has been exhibited in other spaces, such as the Armand Cardona and Torrandell library in Vilanova i la Geltrú, or the Manuel de Pedrolo library in Sant Pere de Ribes. 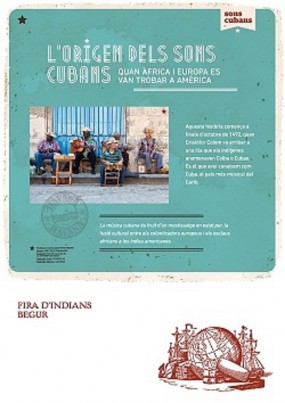